Splatoon 2 - Inkresistable or a Mess?

Splatoon 2 - Inkresistable or a Mess?
Posted by Unknown at 05:06 No comments:

Understanding How to Balance Writing - 6 Easy Tips
Posted by Unknown at 21:02 No comments:

Review: Children of Earth and Sky

Children of Earth and Sky by Guy Gavriel Kay
My rating: 4 of 5 stars

Guy Gavriel Kay is someone whose work I have struggled to appreciate to its fullest. Yet here is Kay at his sublime best, writing with poetic elegance and in a unique present tense with omniscient voice that few other authors could carry off with the skill Kay does.

The essential premise of this novel focuses on several different characters all travelling to a distant city and beyond. Each of these characters are unique heroes: merchants, painters, pirates, child-slaves-turned-warriors, false-wives, and so on. There is no grand plot to tell in this narrative, because this is a narrative driven by a fantastical history. Essentially, Kay is narrating a fictitious history and conveying truths about the world through a story of interlocking lives and it is beautiful.

The one reason I did not give this the full five star rating, however was due to the way in which one of the main female characters simply hopped into bed with several main characters. It was not the action of this occurring but the way such scenes were described which I disliked, yet others may find these elements perfectly acceptable.

This is a slow-burning, beautifully elaborated novel. One that, like a fine wine, is to be sampled by the correctly attuned palate. If you do not love language and only wish to try the thicker ciders and beers of fantasy look to more populist authors. If you love language, then certainly do read this novel. It has plenty of fantasy elements and is a showcase of beautiful prose.

View all my reviews
Posted by Unknown at 04:57 No comments:

I promised, as part of running this blog that I would include reviews of all manner of things. I have continued my Goodreads reviewing and as a result have a handful of book reviews available to read now. I also have a review of Doctor Strange and now I am going to review the best video games I have played in 2016.

As a disclaimer, these are games are the Xbox One versions (my gamertag if you care is Mistborn22) while the two games at number 10 exist as placeholders owing to the fact that I have yet to play them. I also did not include NBA 2K16 or Just Dance 2016 among this list despite playing them. 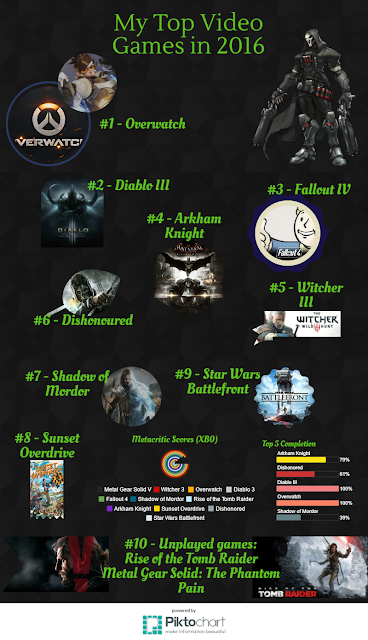 1. Overwatch (10/10) - Overwatch is one of those games I go back to again and again just to play another ten minutes. The original product was excellent fun, but then Blizzard included free DLC, events, specific themed skins, external comics and lore, and a competitive mode. Easily one of the most polished and fun games out there to play. Just watch the following video for an idea of the entire world surrounding this game!

2. Diablo 3 (9/10) - Diablo III is one of those games I had always meant to try until this year. When my friend Adam went home to the Philippines he briefly let me play this game. I was hooked (and to this point it is my second most played) because I am an absolute sucker for fantasy rpgs. Particularly if the lore and story are interesting. A world of soulstones, angels, demons and racial conflict? Diablo III has that and more!

3. Fallout 4 (9/10) - I'm not as far into the game as with some of the others, but the sheer level of worldbuilding and detail is incredible. The fantastic side-quests, character choices and overall game is highly polished. In fact I spent most of my time so far performing side-quests and winning favour with fellow vault-dwellers in order to build up a variety of settlements. It is a game that reminds me of Simcity mixed with COD-style shooting and general RPG fun.

4. Arkham Knight (9/10) - All of the Arkham Asylum games are excellent and Arkham Knight I felt, really put a full stop on a magnificent series. The sense of playing as Batman in an increasingly larger world, solving crimes and puzzles and stealthily making your way around was incredible. Critics complained that the Batmobile was used too often in this game, however I felt the balance between the story and the use of the devices was wonderful. In all the best Batman game I have ever played.

5. The Witcher 3 (9/10) - This is a game that would be much higher. Except, I have only played 6 hours of its incredibly long story for one accomplishment. The world (based on the books by Andrei Sapkowski - also excellent reading I might add) is one of monsters. Monsters who are men and monsters who are the ghouls and vampires of myth and legend. Playing as a monster-hunter you have the opportunity to take on these contracts and follow a sweeping storyline. And even after just 6 hours I have a sense at just how grand that storyline is.

6. Dishonored (9/10) - Want to be a silent assassin with incredible magic abilities? Yeah, me neither - but that's exactly what Dishonored is all about. You start the story as Corvo Attano, bodyguard to the Empress, who is framed for her murder and imprisoned. Fortunately, you are freed by a group of loyalists who explain the situation and set you on a path of vengeance and redemption. Plus you get incredible abilities such as possession of rats, blink teleportation and windblasts. Play how you want: stealthy and bloody, stealthy and innocent, or with a hail of gunfire. High-chaos, low-chaos, the choice is all yours!

7. Middle Earth: Shadow of Mordor (9/10) - The Lord of the Rings is my favourite book series and the films are among my favourites also. I was worried that Shadow of Mordor would depart far too much from the established lore, however it is a wonderful addition to the lore and the game physics are unique. The concept of bosses who remember past-encounters with you thanks to the wonderful Nemesis system is terrific, as is the Assassin's Creed-style combat and wall-climbing.

8. Sunset Overdrive (7.5/10) - It turns out that the makers of such games as Ratchet and Clank (and reportedly Spyro) had further unique ideas up their sleeves. I downloaded this as a free Games-With-Gold offering and boy is it fun chaos. For those who prefer there is a profanity and gore filter, and countless other options for editing your game character and play style. Yet the sheer idea of grinding around a city, defeating hordes of mutated fizzy monsters is pure fun and colourful (self-mocking) delight.

9. Star Wars Battlefront (7.5/10) - I suspect that I, like many other 'super-fans' of Star Wars was expecting something a little more fine-tuned. Of course, it appears that spending the extra 30 dollars (per pack) for the DLC may bring the experience that was hoped for and in and of itself Battlefront is not a terrible game. It's merely that it could have been a better Star Wars experience with a campaign, greater choice of troop types (which was what made the originals fun) and more maps (again with better choice). Hopefully the sequel will improve these elements!

The Magic of Writing

Recently, I started watching Penn and Teller: Fool Us on Netflix. Only the first season was available but it was fascinating watching magicians, mentalists and other illusionists attempt to fool two high-profile magicians in a television show format. Below I have linked videos of some of the more impressive tricks I saw performed.


On Saturday 12, I also watched Dynamo perform his magic in Rod Laver. Despite having seen his tricks on tv before it was incredible to witness him put a phone into a bottle live in one quick motion. Admittedly his tricks with levitation are less impressive in a darkened theatre, yet some of his vanishing and transformation tricks were seamless and captivating.
Magic tricks have always fascinated me. Currently the swiftness and skill of how magicians out-think their audience with misdirection, forcing and sleight of hand fascinates me. The following article focuses on psychological studies into the concept of how such tricks work on the mind of the audience: https://www.google.com.au/amp/www.theatlantic.com/amp/article/385468/?client=ms-android-samsung
Magic, in my eyes, is all around us. The writer, regardless of genre, must capture that magic. They must misdirect their reader with clever red herrings or breadcrumb trails in their plots. They must force the reader to reach a conclusion that is satisfying. A simple plot becomes a marvelous plot (or magic trick) when you stay ahead of the audience. Hence essentially the real secret of magical writing is through clever planning to ensure that you are always one step ahead of your readers.
Posted by Unknown at 17:35 No comments:

Why the US Election Result Does Not Matter

Today the world watches as the USA go to the polls to elect their new President. Or rather, due to the convoluted system - 270 electoral vo...